What is Radioactive Decay?

The majority of the elements in the periodic table are “stable,” and non-radioactive. Some, however, are unstable and experience a process called radioactive decay, during which they emanate ionizing radiation.

Unlike other forms of radiation, ionizing radiation is harmful to the human body because it alters our DNA. Longterm and/or overexposure to ionizing radiation can make you sick, cause intense burns, cause cancer, and has additional negative, long-term side effects.

One definition of radioactive decay could be, “the emission of energy in the form of ionizing radiation.” But what is this energy – and how is it “energized?”

First, you have to understand a bit more about the periodic table. Most images of the periodic table are color-coded based on the ways individual elements are categorized into groups. One of the most basic of these groupins is:

You could also divide the elements into two categories:

Since the majority of the 118 elements found on the current periodic table are considered “stable,” it also means these elements’ nuclei have strong enough bonds to hold themselves permanently together. However, there are 15 elements found in nature that are considered unstable all on their own. Then there are other elements that become unstable via various chemical processes, and that adds about 22 more to the mix. Altogether, the current periodic table shows 37 elements as being radioactive.

The elements’ instability is caused by loose bonds in their nuclei, so the elements continue to “decay,” or lose some of their energy, to achieve a stable, tightly-bound nucleus.

When an element emits ionizing radiation in its efforts to become stable, it is referred to as a radionuclide.

As radionuclides decay, they continue transforming into radioactive variations of themselves, until they finally become stable (and safe again). This process of radioactive decay can happen in a single step, or it can take place over and over again for multiple steps. If radioactive decay occurs multiple times over, the process is referred to as a decay chain.

For example, here is a diagram depicting the decay chain for the very unstable, and radioactive radionuclide, U(ranium)-238, and all of the unstable radionuclides in the decay process until it becomes PB-(Lead)-206, where it’s stable again. 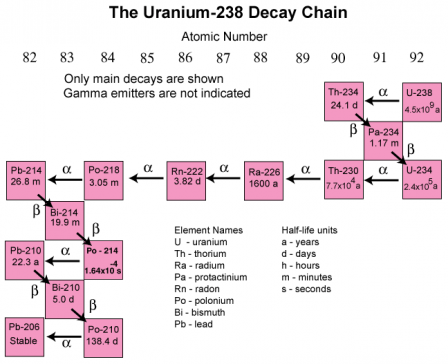 Protect Yourself From Radionuclides

If you work in a lab, weapons manufacturing plant, or anywhere that stable elements are intentionally altered to become radioactive, your company has a Radiation Safety Plan of some sort in place. Similarly, anyone working in another version of a radioactive career will be provided with the education and protective products required to keep them safe.

However, some of us are exposed to radioactive decay in our everyday lives, and this requires awareness and proactive action to keep yourself safe. Ultimately, radiation sickness occurs when you are exposed to large doses of radiation all at once, like a nuclear plant meltdown or nuclear weapons detonation. Or, it can happen via small doses of ionizing radiation over a long period of time. Read, Know Your Radiation Exposure Limits, to learn more about that.

Slow, long-term exposure is the most common way most of us would be affected by radioactive decay. For example, radon is one of those 15, previously mentioned elements that are radioactive and found in Mother Nature. It is part of the earth’s crust and depending on where you live, your home can have higher-than-normal levels of radon toxicity, which is a threat to your health.

In our post about radiation doses in our daily lives, we mentioned that radon, “Radon is a radioactive gas that can is sucked into your home through the soil via cracks, structural holes, and decaying structural materials. Without proper ventilation, this gas gets trapped. Radon may also be present in water that you swallow or dust particles that you inhale.”

You can Click Here to view the CDC’s Radon Zone Map. However, we recommend having your home tested to be on the safe side. The tests are inexpensive and you can “fix” it if levels are above the recommended guidelines of 4 picocuries per liter (pCi/L) or higher.

Being aware of where you live and its radioactive exposure from geographical, environmental, and industrial sources is the best thing you can do to protect yourself. Protection from harmful ionizing radiation via radioactive decay can be as simple as doing what it takes to “clean it up,” or as serious as moving elsewhere to minimize your family’s risk.

If you are concerned about radioactive decay and whether or not you’re at risk, visit the EPA’s website on Radiation Protection to learn more on the subject.

Lancs Industries is dedicated to creating effective and reasonably priced radiation shielding and containment products to increase the safety of workers in potentially hazardous environments. We’re working to create a safer and healthier world.