Glovebags for Radiological Work on Piping and Valves

During the planning for radiological work on piping and valves, one of the options is to consider the use of a glovebag. Many people think that glovebags take too long or are too difficult to install. Lancs glovebag models LI-304 and LI338 have a continuous Velcro strip that allows the worker to wrap the glovebag around the pipe or valve, install any tools, seal the Velcro and then tape each end.

The LI-304 and LI-338 glovebags are the same shape, just different dimensions. The LI-304 is 18” in diameter by 24” long. The LI-338 is 24” in diameter by 36” long. Once the Velcro is sealed it should be secured by gluing a patch over the Velcro or taping it securely. Some facilities apply a sealant such as RTV to the Velcro before it is squeezed together. Sealing the Velcro is a work practice that ensures airborne contamination in the glovebag will not escape, since the Velcro closure is not air-tight. The installation should only take a few minutes. Lancs can make these glovebags in any size and install accessories including waste sleeves, HEPA filter sleeves, or drain connections.

There were at least two incidents at power plants involving the spread of contamination when workers performed grinding on the inside of piping. In each case, the pipe had been cut and was being groomed by workers for a butt weld. The grooming involved the removal of debris and corrosion near the end of the pipe. This was done by workers using a motorized wire brush or flapper wheel. Once the oxide layer on the inside of the pipe was disturbed, the fixed contamination became loose and was spread throughout the work area and on to the worker. 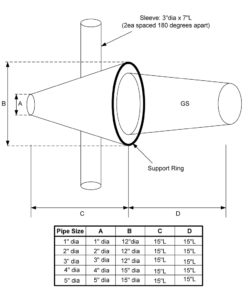 The Lancs grinding glovebag was developed by Lancs working with personnel from the Palo Verde Nuclear Power Station. The glovebag installs quickly and allows the worker to groom the pipe without spreading contamination. Once the grooming is complete, the glovebag can be untapped and slid off the pipe. Lancs can make this glovebag in whatever size you need.